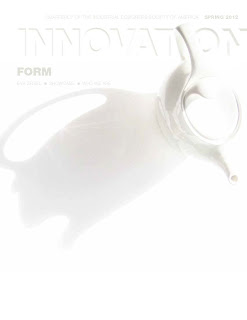 As an industrial designer I have spent most of my career thinking of form as physical shape, and how we perceive and react to it emotionally, aesthetically and psychologically.

Things have been changing recently, and some of the fundamentals we were taught have been challenged. We learned that there was a sort of divine communication between object and human that was encoded into our DNA, an unconscious perception forged from carrying spears or hanging from branches in our past. A one-inch-diameter cylinder was the purest way to communicate graspable; a 20-inch-high platform was an invitation to sit. We just know what a lever is and, therefore, what a switch should look like. There is some kind of primal encoding that we could intuitively draw on to create forms that communicated with users. This in turn would make our designs intuitive and therefore easy to use.

Then, one day, my five year old walked up to the TV eye-level to the logo at the bottom of the screen. Her shoulders sagged at the uninspiring grown-up content that was being broadcast. So she reached up, casually touched her index finger to the left side of the screen and irreverently swiped to the right to dismiss the show.

Convention would suggest that a knob should be turned or a button pressed to respond to her wish. In the absence of any other indication of what to do, her reflex was to swipe, not to go look for a button or the remote.

I contacted George Fitzmaurice, a pioneer of large-screen HCI and gestural user interfaces, and the current head of user interface research at Autodesk, to help me understand what was going on and what this meant to the next generation of user interfaces. I asked him if this was a blip, a special time or a natural pattern of evolution in the way we perceive objects and how to interact with them.

He shared these thoughts:
• The short answer is that you are seeing a natural pattern of evolution. Technology is finally catching up to research that was done many years ago
• Gestures have surged in popularity primarily on two fronts: “finger skating” on a input-display surface (like the Apple iPhone and iPad) and whole-body motion sensing (like the Microsoft Kinect).
• Our expectations evolve. We get a bit more demanding. We want to do more customized actions with less effort and don’t want to repeat ourselves. Could it be that we have a little bit of an interaction divas inside us?

So, what does this teach us about the use of design fundamentals versus breaking conventions? How important is designing to our intuition about how things work versus redesigning expectations, and risking upsetting the inner diva?

George explained:
• Design has to be grounded in something. Then you can tweak it. I don’t think we redesign our expectations, we evolve them. There is never a new system. It sounds harsh but it’s true. There are new elements to a system, but the majority of elements and concepts have been leveraged from the past and already learned by the user.
• In many ways, designers are flirting with the user. Designers wish their system to be a bit different than the rest of the pack: fun, visually appealing and a little bit of an enigma, but not too much.

How we learn all this is also a big deal. The manual is being replaced with new-media help on devices. Our expectations are also rewired by what we see on TV and in movies. Tom Cruise gesticulating in Minority Report or John King analyzing electoral maps is subtly teaching us new strategies to try. Savvy advertisers are also baking the instructions into TV commercials so we know what to do with our new purchases without even realizing we’ve been taught.

Finally, George reminded me not to forget about what is happening with natural language as input. It should be no problem for the little ones. They’re already giving their toys voices, so it will just be one less wonderful thing about childhood to unlearn!

This is a collection of occasional writing relating to design.
Alistair Hamilton
@DesignPost